Two new studies from Germany paint a sobering picture of the toll that Covid-19 takes on the heart, raising the specter of long-term damage after people recover, even if their illness was not severe enough to require hospitalization.

One study [Outcomes of Cardiovascular Magnetic Resonance Imaging in Patients Recently Recovered From Coronavirus Disease 2019 (COVID-19) – JAMA ] examined the cardiac MRIs of 100 people who had recovered from Covid-19 and compared them to heart images from 100 people who were similar but not infected with the virus. Their average age was 49 and two-thirds of the patients had recovered at home. More than two months later, infected patients were more likely to have troubling cardiac signs than people in the control group: 78 patients showed structural changes to their hearts, 76 had evidence of a biomarker signaling cardiac injury typically found after a heart attack, and 60 had signs of inflammation.

These were relatively young, healthy patients who fell ill in the spring, Valentina Puntmann, who led the MRI study, pointed out in an interview. Many of them had just returned from ski vacations. None of them thought they had anything wrong with their hearts.

“The fact that 78% of ‘recovered’ [patients] had evidence of ongoing heart involvement means that the heart is involved in a majority of patients, even if Covid-19 illness does not scream out with the classical heart symptoms, such as anginal chest pain,” she told STAT. She is a cardiologist at University Hospital Frankfurt. “In my view, the relatively clear onset of Covid-19 illness provides an opportunity to take proactive action and to look for heart involvement early.”

The other study, which analyzed autopsy results from 39 people who died early in the pandemic and whose average age was 85, found high levels of the virus in the hearts of 24 patients.

“We see signs of viral replication in those that are heavily infected,” Dirk Westermann, a cardiologist at the University Heart and Vascular Centre in Hamburg, said in an interview. “We don’t know the long-term consequences of the changes in gene expression yet. I know from other diseases that it’s obviously not good to have that increased level of inflammation.”

Taken together, the two studies, published Monday in JAMA Cardiology, suggest that in many patients, Covid-19 could presage heart failure, a chronic, progressive condition in which the heart’s ability to pump blood throughout the body declines. It is too soon to say if the damage in patients recovering from Covid-19 is transient or permanent, but cardiologists are worried.

“These are two studies that both suggest that being infected with Covid-19 carries a high likelihood of having some involvement of the heart. If not answering questions, [they] prompt important questions about what the cardiac aftermath is,” said Matthew Tomey, a cardiologist and assistant professor of medicine at the Icahn School of Medicine at Mount Sinai Health System in New York. He was not involved in either study.

“The question now is how long these changes persist,” he added. “Are these going to become chronic effects upon the heart or are these — we hope —  temporary effects on cardiac function that will gradually improve over time?”

Since the pandemic began, people with underlying cardiovascular problems such as high blood pressure, coronary artery disease, or heart failure have been known to be at higher risk for infection and death. The connection between Covid-19 and blood clots emerged later, after doctors began connecting the pulmonary embolisms, strokes, and heart attacks they were seeing to the virus.

Cardiac problems in recovering patients could belong to a pattern of lingering symptoms. Tomey sees signs of weakness in patients who had Covid-19 in March or April, when the disease was surging in New York.

“Patients come to my office saying, ‘Hey, I’m a 31-year-old who used to run and be completely unlimited in my exercise, and now I get palpitations walking across the street. Or I get out of breath climbing up to my second-floor apartment,’” he said. “Individuals are exquisitely tuned in to their own capacity for exercise, so I take that very seriously. Our challenge is to understand the why.”

Marc Pfeffer, a cardiologist at Brigham and Women’s Hospital in Boston, called both the autopsy and MRI studies a sobering warning. He was not involved in either. He’s concerned about relatively young people losing their cardiac health reserves, which typically decrease with age and can set the stage for heart failure.

“We knew that this virus, SARS-CoV-2, doesn’t spare the heart,” he said. “We’re going to get a lot of people through the acute phase [but] I think there’s going to be a long-term price to pay.

“If this high rate of risk is confirmed, … then the crisis of COVID-19 will not abate but will instead shift to a new de novo incidence of heart failure and other chronic cardiovascular complications,” they wrote. “We are inclined to raise a new and very evident concern that cardiomyopathy and heart failure related to Covid-19 may potentially evolve as the natural history of this infection becomes clearer.”

Asked if there is something that can be done for patients now, Mount Sinai’s Tomey said, “I would love to have the answer to that question.”

The study findings suggest yet another facet of the illness that must be tracked, wrote a team led by Dr. Valentina Puntmann, PhD, of University Hospital Frankfurt in Germany.

“[In our study], cardiac magnetic resonance imaging revealed cardiac involvement in 78 patients (78%) and ongoing myocardial inflammation in 60 patients (60%),” the group wrote. “These findings indicate the need for ongoing investigation of the long-term cardiovascular consequences of COVID-19.”

Thus far, most research on COVID-19 has focused on the disease’s respiratory effects, but there has been increasing evidence of cardiovascular effects as well, according to the authors.

“A number of case reports and small series suggested that COVID-19 prominently affects the cardiovascular system by exacerbating heart failure in patients with preexisting cardiac conditions and troponin elevation in critically ill patients,” they wrote. “[But] there remains poor insight into the cardiovascular sequelae in unselected patients, including those with no preexisting conditions, who were not hospitalized, or had no or only mild symptoms.”

Puntmann and colleagues conducted a study that included 100 patients identified through the University Hospital Frankfurt COVID-19 Registry who had recovered from COVID-19 disease between April and June. All patients underwent cardiac MRI; median time between COVID-19 diagnosis and cardiac MRI was 71 days. The group matched recovered patients by sex and age to control groups of healthy volunteers (50) and risk-factor matched patients (57). Of the 100 recovered patients, 67% recovered at home and 33% were hospitalized.

The investigators found the following: 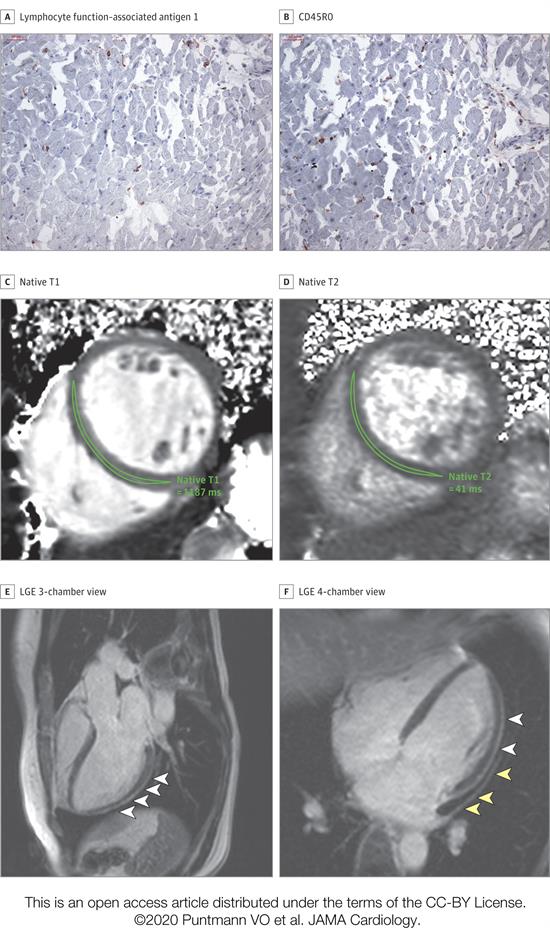 “The most prevalent abnormality [on cardiac MRI] was myocardial inflammation (defined as abnormal native T1 and T2 measures), detected in 60 patients recently recovered from COVID-19 … followed by regional scar and pericardial enhancement,” the group noted.

The study results paint a grim picture, according to an accompanying editorial written by Dr. Clyde Yancy of Northwestern University in Chicago and Dr. Gregg Fonarow of the University of California, Los Angeles.

“We are inclined to raise a new and very evident concern that cardiomyopathy and heart failure related to COVID-19 may potentially evolve as the natural history as this infection becomes clearer,” Yancy and Fonarow wrote. “The concerns [raised here] are not theoretical but instead practical and require our due diligence to study and prepare for what may be another dimension of the COVID-19 crisis.”